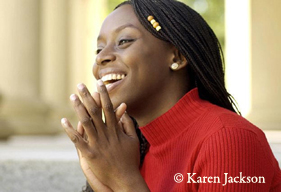 Chimamanda Ngozi Adichie was born on 15 September 1977 in Enugu, Nigeria, the fifth of six children to Igbo parents, Grace Ifeoma and James Nwoye Adichie. While the family's ancestral hometown is Abba in Anambra State, Chimamanda grew up in Nsukka, in the house formerly occupied by Nigerian writer Chinua Achebe. Chimamanda's father, who is now retired, worked at the University of Nigeria, located in Nsukka. He was Nigeria's first professor of statistics, and later became Deputy Vice-Chancellor of the University. Her mother was the first female registrar at the same institution.

At the age of nineteen, Chimamanda left for the United States. She gained a scholarship to study communication at Drexel University in Philadelphia for two years, and she went on to pursue a degree in communication and political science at Eastern Connecticut State University, where she also wrote articles for the university journal, the Campus Lantern. While in Connecticut, she stayed with her sister Ijeoma, who runs a medical practice close to the university. 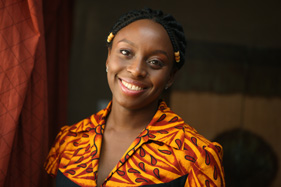 It is during her senior year at Eastern that she started working on her first novel, Purple Hibiscus, which was released in October 2003. The book has received wide critical acclaim: it was shortlisted for the Orange Fiction Prize (2004) and was awarded the Commonwealth Writers' Prize for Best First Book (2005).

Her second novel, Half of a Yellow Sun (also the title of one of her short stories), is set before and during the Biafran War. It was published in August 2006 in the United Kingdom and in September 2006 in the United States. Like Purple Hibiscus, it has also been released in Nigeria.

Chimamanda was a Hodder fellow at Princeton University during the 2005-2006 academic year, and earned an MA in African Studies from Yale University in 2008; her thesis was entitled 'The Myth of "Culture": Sketching the History of Igbo Women in Precolonial and Colonial Nigeria'. In 2011-2012, she was awarded a fellowship by the Radcliffe Institute for Advanced Study, Harvard University, which allowed her to finalize her third novel, Americanah. The book was released to great critical acclaim in 2013.

Chimamanda is now married and has a daughter. She divides her time between Nigeria, where she regularly teaches writing workshops, and the United States.

A list of the awards she has won is available here.